What is a Twin Flame relationship? 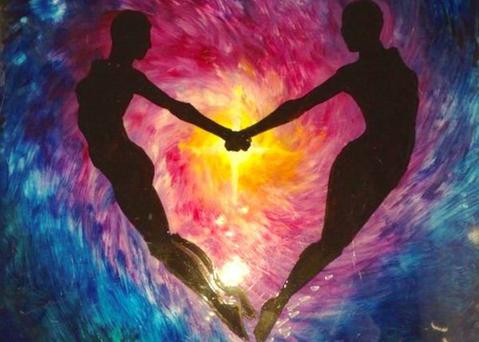 Your Twin Flame serves as a mirror, for you will understand more about yourself and what it means to be human than you ever have before when united with your Twin Flame. You are also able to forgive them for running from the relationship, as many partners do when they first meet their Twin Flames.

Meeting a soulmate is nothing like meeting your Twin Flame.
When one meets a soul mate, they are connecting with someone they can confide in, there is a connection with them immediately, they make you feel good, light hearted and happy and they are always there for you. Meeting a soul mate is like meeting an old friend and there is a loving connection. This can be a bit unnerving, to perhaps have strong feelings for someone when you have only just met them.

The Twin flame ascension is the process that leads to the higher dimension of one’s self. It shifts you to higher consciousness. It is the purification process for you and your Twin Flame. So, the purpose of the Twin Flame union is to square off the imbalance of spiritual energy, to create mutual harmony and consequently, achieve eternal bliss.

When you meet your Twin Flame, time stops, your heart beats faster and you feel as if you are being pulled into a void, it can feel like an out of body experience as you are drawn to the person standing before you. It can feel as if nothing else exists, except the two of you. There can be an instant recognition, incredible attraction and also deep fear and suspicion and the fight or flight reaction can kick-in to your whole body.

You are drawn to this person but want to run away from them at the same time. Nothing will ever be the same again, all you can do is ALLOW things to unfold.
The Twin Flame union is not about romance, it is about spiritual growth and service, although in some cases the Twin Flames can be in a romantic relationship as part of their earthly contract, at this level of understanding, interest in a human like relationship is not important, where-as serving together for the benefit of all, is. Once the Twin Flames obliterate the runner-chaser paradigm, they are able to fill their lives with endless light and love.

As if guided by the higher power, the Twin Flame couple have a huge task ahead of them. They both need to be fully present and ready to undertake spiritual work in this incarnation that will affect not only their own lives but the lives of millions of people on earth.

For their true work to begin though, they have to first face the deepest and darkest parts of their own selves by reflecting back and forth between themselves through the absolute mirror of their soul. They see each other naked and this can trigger huge shifts in consciousness for each of them, healing each other of whatever is holding them back. It can be a very uncomfortable experience for both of them, but as easily as they can cause pain and devastation for one another so can they raise each other up and inspire.

Many times may they separate, due to passionate arguments, misunderstandings and so on. They always return to each other though, each time re-uniting the intensity over and over until finally reaching the point of no return. Nothing can be hidden from one another, there is nowhere to run or hide and the beautiful part is that they accept all the seeming flaws, all the negative aspects of their twin. They must accept each other to unite and become whole so that they can fulfil the mission that they have come to Earth for at this time.

This is one tough experience that these amazing beings have chosen to go through in this life time. Humanity needs these powerful energies at this time as Earth transitions into higher realms, as each soul on this planet goes through the ascension process. Twin flame ascension comes after the runner and chaser stage of the union. It is the time when both souls have started to accept their counterpart. They have emotionally and spiritually awakened for their twin.

You and your twin grow together to achieve full integration of your higher self. The main aims of the Twin Flame relationship are to enjoy divine love and harmony; to have the peace that is unknown for the unawakened souls and to become one with your twin. There are different Twin Flame ascension stages, every stage is a step towards betterment.

As you ascend so all the things you have known previously either hold no meaning or feel strange. As you ascend higher, you allow your spiritual part to play its role and thus what is considered to be normal human behaviour and human experiences don’t feel the same. You might change your living habits; your relationships, job, home, or make health improvements such as your choice of diet, everything changes.

At the separation stage, one or both twins are unable to understand the other. They don’t know why there’s a great energy pull; but when the ascension starts, you allow this attraction to reach its peak. Your twin becomes the most important person on earth. You both are ready to work on spiritual, emotional and physical levels to achieve your spiritual place of harmony.

Your unconditional love will teach you to ignore the flaws of your twin and make them appear as the perfect Being. Finding your Twin Flame doesn’t mean that you have found a person who is like a movie-star but it is about loving an imperfect person who seems perfect to you.

The same is the story at your end, you are not perfect and you know it very well. At this stage, both twins love each other seamlessly. Formerly, before the separation, the mood of one twin produces its impact on the other but now, things have changed. As you are heading towards purity of your soul, you are not dependent on each other’s behaviour. You have a purified soul now, who has learnt to let go and forgive. Ascension is not a single day process. It is a long journey that moulds you in many ways. When you achieve your spiritual place in higher realms, you feel like everything has stopped, and only you and your twin are running in the flow.

Both twins work as the light for the other and show the right path that leads towards forever happiness. To reach this stage, both partners have gone through the tough stages in which the soul has to decide what is wrong and what is right. It is not something that occurs to you when you wake up in the morning. It could take years to purify your soul and achieve full integration with your higher self as a fully integrated Twin Flame union.

Only having gone through the process of two becoming ONE, whilst being in a human body on earth, operating under the veil of forgetfulness, can they show through example that it is possible to accept each other and create a beautiful new world.

When the merging process is completed a vortex of light is generated from the Twin Flame energies and that influences millions, possibly billions of souls on Earth.
Their influence goes beyond acceptance, each time a Twin Flame couple completes their final step into union, when they fully accept each other, their chakras are aligned and the merging is complete, a vortex is generated from their energy field which begins to influence millions upon millions of souls on Earth.